Philippe Hardy began his career in large starred houses (with Georges V, Windsor, or even the Carlton de Lausanne) before becoming the head chef of the French ambassador to Sofia, Bulgaria. This exceptional starred chef met his wife, who was then a star dancer, there. The couple opened their first restaurant in Blainville-sur-Mer, in the English Channel. This successful adventure completes Philippe Hardy’s culinary reputation, whose passion and talent are prized not only in Europe, but also in Japan and in the United States.

The kitchen of the starred chef Philippe Hardy focuses on the land and the sea products. In love with generous and authentic products, he only uses vegetables that grow in respect of nature, and whose incomparable flavours are sublimated by a prestigious cooking that oscillates between tradition and modernity. But Philippe Hardy’s cuisine is also the seafood. The fusional relationship he has with this magical environment has led him to study fish preparation in depth. These are extremely precise techniques, “Ike-jimé” and “Chi-nuki”, that he brought back from Japan. Philippe Hardy cuts his fish with pure and delicate gestures, thanks to the use of handmade knives made in the land of the rising sun. His cuisine is an alliance between the benefits of food and its flavours, between respect for nature and a profound devotion to an art that brings it to its quintessence. 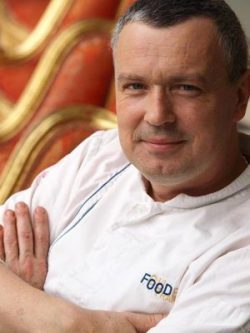 Discover in detail the event

The exceptional speakers who will inspire you

Your framework to decompress and find meaning

The organizers and their philosophy at the service of your values

The detailed program of your seminar to optimize your time