Michel Mangeolle left the hotel school Gérardmer in 1977 to become a graduate cook. He quickly became an expert chef, providing his know-how through his training and culinary consulting company MCE. Trainer and culinary consultant since 2003, he works with major food groups and for the Paul BOCUSE Institute, the Christian VABREL Bakery School (MOF) and the FAGOR grande cuisine company among others.

Formerly owner of a 3-star hotel restaurant, he is a medallist of the National Assembly and a member of the culinary academy of France. Since 2005, he has also been a member of Auguste Escoffier’s disciples. This voluntary commitment aims to promote the strong values of the French master chef. Master Escoffier was a pioneer in all domains of cooking. Some of its principles are still relevant today, like this one, dear to Michel:

“Cooking will evolve as society itself evolves, without ceasing to be an art… We must seek new ways within ourselves in order to leave working methods adapted to the mores and uses of our time”.” 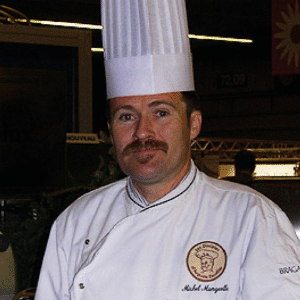